Other Lectures and Presentations

Are Trade Wars “Easy to Win” or Even Worth Having? A Debate on the Trump Administration’s Trade Policy 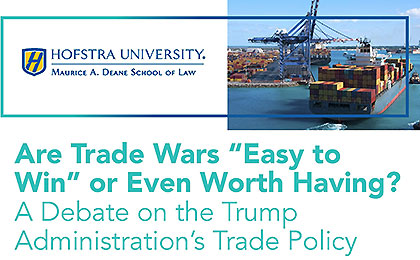 In the past two years, President Donald Trump has dramatically changed U.S. trade policy by invoking his powers under U.S. law to impose substantial tariffs on numerous countries around the world and by seeking to change or potentially terminate existing trade agreements like NAFTA and the World Trade Organization Agreement. The merits of his new aggressive approach to trade has been sharply criticized by many economists and analysts. But his policy has also many strong defenders who believe it will revive and strengthen the U.S. economy as well as weaken geopolitical rivals like China.

Hofstra is pleased to host this debate between two experienced and knowledgeable analysts of U.S. trade policy who will discuss and debate the merits of the Trump Administration’s new approach to trade.

Raj Bhala is the Brenneisen Distinguished Professor of Law at the University of Kansas School of Law. He is an internationally-recognized expert on international trade law and policy, including the two-volume treatise: “Modern GATT Law” and the leading textbook “International Trade Law.

Michael Stumo is the Chief Executive Officer, Coalition for a Prosperous America (CPA) in Washington DC. CPA is a national bipartisan organization including agriculture, manufacturing and organized labor. CPA works for policies to balance U.S. trade, create jobs and achieve broadly shared prosperity. CPA represents the interests of over 4.1 million households through its association and company members.

Julian Ku is the Senior Associate Dean for Academic Affairs and the Maurice A. Deane Distinguished Professor of Law at Hofstra University School of Law. He teaches and writes on questions of U.S. foreign affairs law, international trade law, and U.S. foreign policy.

Bhala, Raj; Stumo, Michael; and Ku, Julian, "Are Trade Wars “Easy to Win” or Even Worth Having? A Debate on the Trump Administration’s Trade Policy" (2018). Other Lectures and Presentations. 7.
https://scholarlycommons.law.hofstra.edu/lectures_other/7