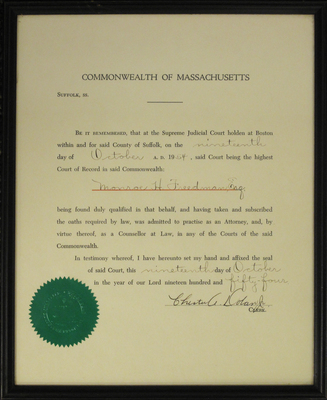 Be it remembered, that at the Supreme Judicial Court holden at Boston within and for said County of Suffolk, on the nineteenth day of October A.D. 1954, said Court being the highest Court of Record in said Commonwealth: Monroe H. Freedman, Esq. being found duly qualified in that behalf, and having taken and subscribed the oaths required by law, was admitted to practise as an Attorney, and, by virtue thereof, as a Counsellor at Law, in any of the Courts of the said Commonwealth.

In testimony whereof, I have hereunto set my hand and affixed the seal of said Court, this neineteenth day of October in the year of our Lord nineteen hundred and fifty-four.